I could hardly believe when I “met” Kelsey Freeman on Twitter last summer that she was about to embark on a 10-week trip to France on $1,000. I wanted to know her secret — I’m young, I’m poor, but I’m an insufferable Francophile — how did she do it?

She realized that traveling is about priorities. She’d rather people watch than go to a museum, for example, and she’d rather enjoy the countryside for a month than Paris for a week. It’s all about what’s most important to you and what you are or aren’t willing to give up. It’s a simple but brilliant point, and in planning my recent trip to Europe, I made similar judgment calls: saving on housing was more important than being in the city center and walking is preferable to paying for public transportation.

But the one thing I always have a hard time compromising on is great food — which is why I’m always so happy to visit my hometown of Taipei. When it comes to eats on this tiny Asian island, you rarely have to choose between taste and price. Sure, the city has it’s share of tremendous fine dining establishments, but a more than satisfying meal can easily cost less than $3 to $5 (tax included). 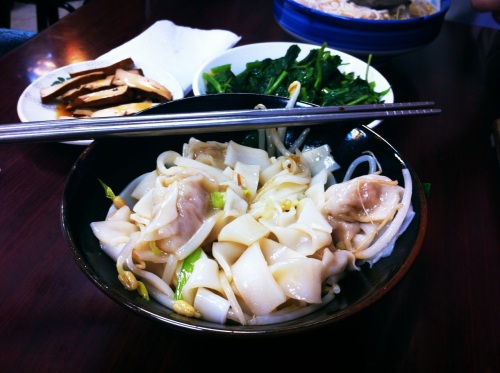 One of the first stops I always make when I’m home is a small mom-and-pop eatery right next to Wellcome supermarket in Tien Mu Square. I’ve been a loyal customer since my high school days at the nearby Taipei American School, when my friends and I would make a lunch outing here every couple of weeks. Even now, I usually opt for the wonton and bean sprout guo tiao, or thick rice noodles, with some shared sides to round out the meal. The noodles themselves are less than $2, and the bill’s rarely come out to over $3 per person. 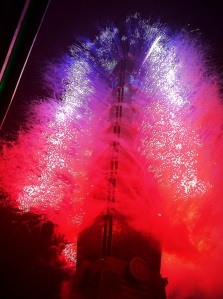 Yesterday, we rang in the new year in the downtown Xinyi area of Taipei. Keeping in tradition of the younger crowd, we sought views of the ever popular Taipei 101 fireworks from a nearby nightclub and ended up at Myst, a newly opened establishment at the top of ATT4Fun. We had an amazing vantage point from the 8th floor balcony, accessible to attendees who booked tables. Being in the next building over from the skyscraper, we were close but not too close.